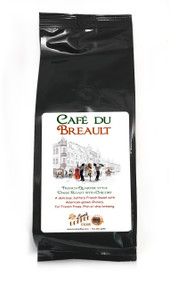 This coffee is a labor of love. With the cost of these premium beans and purchasing the best chicory we can find in the United States (direct from the farm in Nebraska) we are not making money, but that's fine. This is a coffee concept we had to tackle and win, and we are proud to present to you the rebirth of a quality French Quarter Dark Roast with chicory. Since the originator of chicory-blended coffee in the USA has chosen to cut corners and purchase inferior ingredients, it was left to us Breaults from Louisiana and Quebec to save this American Heritage coffee concept. We accept the challenge.

Café du Breault (pronounced "Bro" -- it's French) is our answer to the demand for New Orleans French Quarter-style coffee, specifically Café du Monde. This style of coffee is a very dark roast, with roasted chicory added not as a filler but as a crucial ingredient in a traditional recipe.

To many Vietnamese-Americans, this French Quarter style is the "new Vietnamese coffee." Café du Monde is the big brand name in this style, and we could have just sold Café du Monde to all the people who come to us looking for it.

But we wanted to do better. Café du Breault is made from premium, fully ripened beans, so it's naturally lower in acid and more flavorful. We roast it dark, but not dark enough to char it, so it's easier on your stomach and doesn't burn away all the subtle flavors. The chicory is American-grown and freshly roasted. It's really delicious, and we hope you'll give it a try at our introductory sale price. This is a sleeper... we find our own family demanding it at gatherings and as gifts.

More information about Cafe du Monde, and how (and why!) we created Cafe du Breault

To a large part of America, "Vietnamese Coffee" means Cafe du Monde. But Cafe du Monde is actually produced by a Canadian company, sold in a cafe in New Orleans, and made with South American coffee beans. Why would anyone think it was Vietnamese?

Because after the Vietnam war, large numbers of Vietnamese refugees settling in the United States found themselves stranded in a land of weak coffee. They couldn't get their beloved Vietnamese beans due to the trade embargoes. So, they looked for the best substitute they could find: regular American coffee roasted super-dark and mixed with chicory, which gave it the edginess and intensity they craved. Cafe du Monde became a fixture of Vietnamese-American households for generations.

Problem is, Cafe du Monde is made with mass-market quality beans, so it is extremely acidic. Also, its charred-black roast upsets our stomachs and burns away any subtlety in the flavor. That's why we decided not to sell it here: we don't sell any coffee we don't personally love.

But a lot of people -- like, a lot -- come to us asking for Café du Monde because, to them, dark coffee with chicory is Vietnamese coffee. Sometimes, we could get them to try a real Vietnamese coffee and they would be happy. Too often, though, they really wanted that particular flavor profile and nothing we had could ever scratch that itch.

With the success of the Saigon blends, though, we felt like we were finally ready to create our own French Quarter coffee with chicory. We're proud of this and we believe it is a true representative of this style of coffee as well as a premium quality and delicious coffee in its own right.

The name "Café du Breault" comes from Len's last name, which is Brault. A large part of the French half of his ancestry settled in New Orleans, and probably played a part in the development of its coffee heritage. Back then, the name still used its original French spelling and pronunciation (Breault = "Bro"). We decided it was perfect for our new French Quarter coffee!