What defines Vietnamese coffee as unique is a number of elements, including: 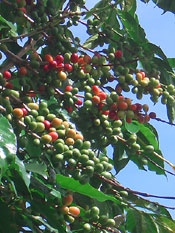 Historically, Vietnam is one of the most important countries involved in coffee cultivation, and today is the world's second largest producer of coffee (second to Brazil), a fact that comes as a surprise to most coffee consumers.

The history of coffee throughout Southeast Asia dates back to Dutch and French colonialism in the 18th and 19th centuries. Around 1890 the French established a thriving coffee industry in several locations of the Annam Region, a mountainous plateau that extends through several countries. In terms of coffee, Laos and Cambodia were probably earlier players than Vietnam. But eventually Vietnam became the leading producer of coffee in Southeast Asia.

Vietnam and Southeast Asia have a fascinating topography. The location of the mountainous regions traverse the area in roughly the same direction as the prevailing winds. There are north-facing slopes that are entirely different in climate than south-facing slopes, and wide regions with altitudes that are right for different species of coffee. Because of this, almost any species of coffee can be grown in what would be considered its ideal, or "native" climate, up to about 3600 feet in altitude. The Vietnamese coffee landscape brews half-a-dozen unique species and varieties, among them Arabica (and an "indigenous" Sparrow, or Se, Arabica), Robusta, Excelsa (sometimes called Chari), Liberica, Catimor and others.

What defines Vietnamese coffee and makes it unique?

First, the topography of the Annamite Plateau is very complex and creates regional microclimates, which were observed over a hundred years ago and exploited for maximum diversity of bean species and varieties. There are two basic approaches to coffee -- single origin versus multi-origin blends. In Southeast Asia, with such diversity of beans available, a multi-origin, blended coffee approach seems natural. Blending bean species and varieties is inherently superior in achieving a broad flavor range, persistance of aftertaste, sophisticated nose, ice coffee performance, and overall mouthfeel and sense of satisfaction for the palate.

The move in South America and other coffee-producing regions to single-source, 100% Arabica in the last decade has narrowed the flavor range and appeal of modern coffee to only those consumers with palates who prefer hybrid Arabicas. Our own public taste tests indicate that 70% of consumers respond better to mixed-species blends of coffee, and tastes run about equal for preference or Robusta versus Arabica. Vietnamese blended coffee thus has a wider appeal among the general populace than single-source, 100% Arabicas. Comments among consumers are often along the lines of "This is how coffee used to taste!" and "I didn't know coffee could taste like this!".

Secondly, roasting preferences establish decades ago favored a lower-temperature, longer roasting process. The dark "French" roast that we refer to today probably originated not as a high-temperature roast, but a slow and long roast that results in beans that have consistent color through the whole bean, and a dark color but no bubbling or burning. This distinction is VERY important, since many Americans today associate French roast with the all-too-common burning of coffee that takes place at certain coffee house chains. Burning coffee results in the breakdown of sugars and oils and fast oxidation and fermenting of coffee once exposed to the air. These drawbacks do not occur in the Southeast Asian dark roast, which is more stable.

Thirdly, beans are generally roasted in what is referred to as "butter oil", which may or may not be actual clarified butter oil. Occasionally vegetable oils are used, and historically, traditional "home-grown" coffee roasting style involves creating almost a caramel-like coating effect with the use of a small amount of sugar, oil, and generally a touch of vanilla or cocoa. This coating blackens in the roast and the beans wind up with almost a thin, hard shell. Why is this done? Robusta beans are uniquely slow to ripen on the bush, and often pickers pick unripe beans along with ripe beans. The traditional coating gives all the beans a similar color. The presence of a few unripe beans does not hurt the overall taste effect of the blend. However, modern growers pick only ripe beans despite the extra labor, and do not feature this coating in their roasting, opting simple for a little oil to keep the beans easy to turn in the slow roasting process.

It's also in the grind and brewing techniques 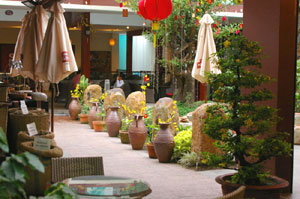 Vietnamese coffee style is not unique to Vietnam. It is popular in Laos, Cambodia, Thailand and other regions. The brewing style is low-tech, using a simple metal filter called a Phin (most likely originated in Cambodia in the 1800s) that is essentially a single-serving brewer and filter (just add hot water!). In Vietnam, coffee is not consumed on the run. People sit in cafés or at home and brew the coffee at their table leisurely in single servings. The Phin filter also works beautifully for making a tall glass of iced coffee.

The proper grind for the Phin filter brewing happens to be similar to what is needed in a French Press. The French, or Coffee Press, typically brews 3-6 cups of coffee and results in a slightly different taste from the Phin filter, but captures the essence of the coffee better than an electric drip brewer.

American electric drip brewers can do a good job with Vietnamese coffee simply by cutting back slightly on the amount of the grinds and using a cone-shaped filter, preferably. The resulting taste is nowhere near as intense as the Phin or Coffee Press, but still creates a superior coffee brew.