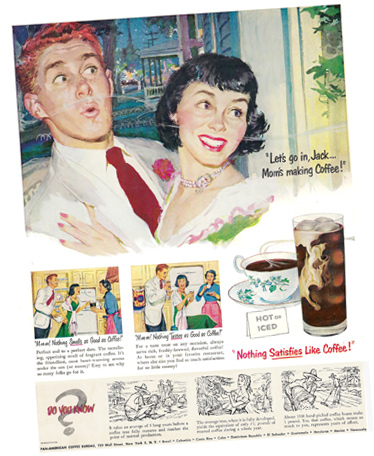 To download a high-resolution color printable version of this poster, click here.
Then right-click on the image and select "Save image as..." and select a location on your computer to save it.

This page is the first in a series-to-come about coffee ads from the mid 20th Century. These ads helped define and illustrate the impact coffee had on the United States... and help explain the coffee culture of today.

In 1937 the coffee boards of 7 Central and Southern American Countries banded together to create the Pan-American Coffee Bureau to promote coffee from the regions south of the USA. This organization had a profound impact on American coffee culture, and is credited with making the term "Coffee break" a household word and a business standard practice, through a $2 million ad campaign begun in 1952.

The organization even hired a psychologist to help them market effectively to mainstream, middle-class Americans.

The organization intruded into politics, even as far as hosting a talk radio series with Eleanor Roosevelt and other notables in which they professed that their countries were solidly behind the USA, with this aired statement in an interview shortly after the event of Pearl Harbor:

"In this moment of trial, the seven neighbor countries which make up the Pan-American Coffee Bureau welcome the chance to express their support for their great good neighbor, the United States. The new solidarity which has been affected between the Americas in the last few years stands us all in good stead in the face of this emergency. This applies not only in a commercial sense, for Uncle Sam can count on Latin America for essential materials, whether oil or tin or copper or coffee, but also in a political sense. The Americas stand together."

By the 1950s the Bureau had incorporated 11 countries (as shown on the poster we are providing). They published many books, including a juvenile primer on coffee for schoolchildren. Interestingly, the Bureau was generally "politically correct" (beyond targeting just white, middle-class consumers). The ads implied that making coffee was anybody's honor, either at home or in the office -- man, woman or boss. They also pictured men and women involved equally in the growing, picking, and processing of the coffee beans.

Another effect the advertising had was on mainstreaming the notion of drinking Iced Coffee any time of the year. The poster we are providing here was one of the first ads to show Iced Coffee as the foreground option versus hot.

The phrase "coffee break" was the 1952 invention of the Pan American Coffee Bureau. Supported by its $2 million a year budget, the bureau launched a radio, newspaper, and magazine campaign with the theme, "Give Yourself a Coffee Break--And Get What Coffee Gives to You." The bureau gave a name and official encouragement to a practice that had popularized during the war in defense plants, when time off for coffee gave workers a needed moment of relaxation along with a caffeine jolt. (In fact, Henry Ford had sanctioned a morning "coffee break" for his assembly-line workers circa 1910.) The extraordinary ad blitz also was picked up as a straight news story. "Within a very short space," Charles Lindsay, the manager of the bureau, wrote late in 1952, "the coffee-break had been so thoroughly publicized that the phrase had become a part of our language."

By the end of 1952, 80 percent of the firms in a poll had introduced an "official" coffee break. The Pan American Coffee Bureau used ads and fliers to encourage the spread of the coffee break beyond factories and offices. Hospitals instituted them. After Sunday worship services congregations met for a coffee break with their pastors. The bureau launched a "Coffee Stop" campaign on the nation's roads to encourage motorists to pull over every two hours for coffee as a safety measure. The slogan "Make That One for the Road Coffee" created a furor in the South, where it was interpreted as encouraging drunk driving. Preachers sermonized against the "One for the Road" campaign, citing it as an example of deteriorating national moral fiber. The bureau responded by changing the slogan to "Stay Alert, Stay Alive--Make It Coffee When You Drive." (You'll see this slogan in later ads of this series.)

Even General Dwight Eisenhower's presidential campaign got into the act, using the coffee break idea for its Operation Coffee Cup, in which a "coffee party" introduced Ike to voters "on a cheerful, intimate basis." As Look Magazine noted, the coffee social trend was spreading. "Coffee and dessert boost attendance at town meetings; coffee parties raise funds for a symphony orchestra; coffees join teas as vehicles for parent-teacher conferences, spurred by the ease of serving instant coffee to large groups." Pream Company created a powdered milk to go with powdered instant coffee, so all anybody needed was hot water to brew a cup with creamer and sugar.

Here is an excerpt from the original script of a Pan-American Coffee Bureau-sponsored radio show that aired on the night of December 7th, 1941 just hours after the attack on Pearl Harbor:


[Leon Pearson:] This is Leon Pearson, speaking for the Pan-American Coffee Bureau which represents seven good neighbor coffee-growing nations, and presenting to you American families your Sunday evening visit with Mrs. Franklin D. Roosevelt. This evening, Mrs. Roosevelt has as her guest Corporal James Cannon, 1,229th Reception Center, Fort Dix. But first, Dan Seymour has a word from our sponsors, the Pan-American Coffee Bureau.

[Dan Seymour:] In this moment of trial, the seven neighbor countries which make up the Pan-American Coffee Bureau welcome the chance to express their support for their great good neighbor, the United States. The new solidarity which has been affected between the Americas in the last few years stands us all in good stead in the face of this emergency. This applies not only in a commercial sense, for Uncle Sam can count on Latin America for essential materials, whether oil or tin or copper or coffee, but also in a political sense. The Americas stand together.

[Leon Pearson:] Thank you, Dan Seymour. And now, here's the Pan-American Coffee Bureau's Sunday evening news reviewer and newsmaker, to give us her usual interesting observations on the world we live in, Mrs. Franklin D. Roosevelt.

[Leon Pearson:] And Friday, I understand, Mrs. Roosevelt, you graciously received at the White House the charming young ladies who are representing my sponsor, the Pan-American Coffee Bureau, in a good-will tour of this country.

[ER:] It was a great pleasure to meet these young women from Latin America who were here on a tour of good-will, and I hope they enjoyed their cups of coffee in the White House.

[Leon Pearson:] I am sure they did, Mrs. Roosevelt. And now, speaking of coffee, Dan Seymour, I understand you have a word or two to say on that subject.

[Dan Seymour:] I certainly have. The seven young ladies, who, as guests of the Pan-American Coffee Bureau, have come from their republics to enjoy a visit with leaders in public and social life in the United States, are delighting everyone with their charm, just as coffee, the delicious product of their homelands, delights more and more of us every day. Next week at this same time, Mrs. Roosevelt will be with us again to give us more of her interesting views on world affairs. This is Dan Seymour, saying good evening for the Pan-American Coffee Bureau, and don't forget that good night cup of coffee.

[Unknown announcer 1:] Now, more than ever, do your part: buy defense bonds and stamps.