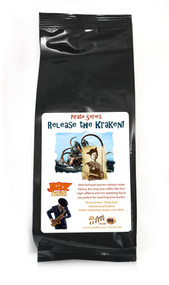 The perfect coffee to prepare you to pillage and plunder! High in caffeine and long on rich, back-palate satisfaction. Release the Kraken has a multi-temperature (Harlequin) roast of our new India Robusta with a little Vietnamese Robusta and Blue Son La Bourbon Arabica in a nod to Shi Yang aka Ching Shih aka Zheng Yi Sao who first fought as a pirate privateer for the Vietnamese Tây Sơn dynasty in its war against the fading Qing Dynasty of China. She eventually came to command hundreds of ships in a Pirate Confederation that essentially took control of the South China Sea and prevailed against all comers including the East India Company, the Portuguese Empire, and Qing China.

This blend is made extra strong and flavorful with India Robusta extract and organic, natural flavors including flower blossom water. The flavoring is subtle, emphasizing the natural tones of the beans and elevating this blend to an intensity that would put (extra) hair on the chest of any respectable Pirate, male or female :-)

As with all our JAZ Improv coffees, this is a labor of love by Len made accessible at the promotional price of $5, and will be in limited supply and subject to the trade winds as to availability.

8 ounces. Please select drip grind or whole bean. Enjoy it now before this ship has sailed!

Around the turn of the 19th century, the Qing dynasty (China's last dynasty before becoming a Republic) was learning hard lessons about their isolation and lack of modernization. This once-noble dynasty found itself thwarted on all sides by enemies using more modern ships, equipment, and strategies.

Ching Shih's pirate career began when she married Zheng Yi, who was a privateer fighting for the Vietnamese Tây Sơn dynasty in the Tây Sơn wars against Qing China and later Nguyễn Ánh. Under Tây Sơn patronage, he fought in his cousin Zheng Qi's fleet. After the Vietnamese achieved victory, Yi set out with his clever and resourceful wife to amass a full naval army and begin to terrorize many regions of the South China Sea. Eventually this force united many others and became a full-scale Pirate Confederation with distinct "armies" named by color - Red, Yellow, Green, etc. These floating armies assisted each other when necessary to push back forces of the Dutch, English, French, Portugese and the Qing Dynasty, for many years.

When Zheng Yi died in Vietnam in 1807, Ching Shih inherited these armies and grew her forces to hundreds of ships (some say as many as 1500) and operated under the field command of her new husband while she operated as Commander-in-Chief. This Pirate Confederation continued to dominate the region until an eventual armistice that included a full pardon for Ching Shih, who retired and lived to the ripe age (for a pirate) of 69 in the company of her family, including grandchildren.

Ching Shih and her husband Zheng Yi Sao are credited with a modernization of the pirate code. While all pirates were violent and often committed unspeakable crimes, the new pirate code established women as equals and even decreed that captured women (pirates or civilians) were to be respected and not mistreated, under pain of execution.

In many ways this infamous Pirate Queen had an impressive impact on the history of 19th century Pacific Ocean history, and her bold intrepid nature inspires this new bold Pirate Series Blend!

This product hasn't received any reviews yet. Be the first to review this product!